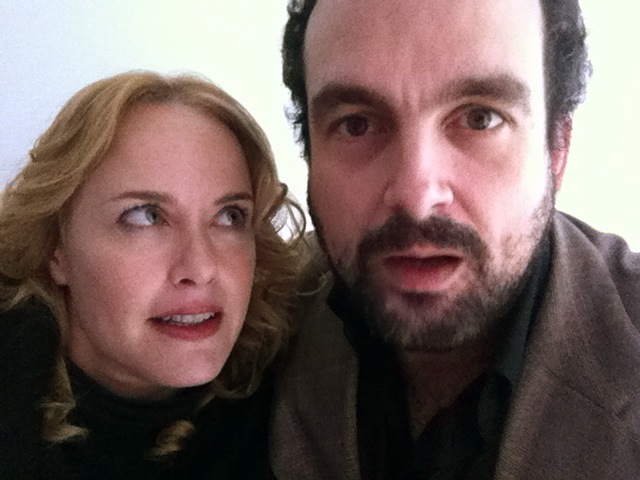 Last night I came to Madrid to shoot my scene in Nacho Vigalondo‘s film “Open Windows”. It is a very complicated film, technically speaking, with relatively few actors. The stars of the film are Sasha Grey and Elijah Wood. Woo-hoo!

I play the older (of course) friend/mentor of Sasha’s character. I don’t want to reveal anything about the film’s plot so I’ll just say we have a conversation via webcam in which I annoy her. Luckily, annoying people is not much of a stretch for me.

My scene was the very first thing on the agenda this morning and it was very complicated for me to interpret. First of all, I memorized one thing but, typical of film, when I got to the set, half the dialogue had changed. No big deal for a “real” actress, but I am mentally retarded and my memory is terrible. I had to memorize a new paragraph in about 15 minutes. What do I look like, Einstein?

Next: Sasha not physically there for our conversation. She had already finished up her work and returned to the U.S. Did I read with a stand-in of some sort? Nope: what I had was a feed into my right ear with the audio of Sasha’s part of the conversation. So I had to speak to, listen and react to her voice in my ear while staring into a camera lens about 2 feet in front of my face (while ignoring the 4 dudes around the camera). Oh, and also deliver my lines so they fit perfectly timing-wise into the pauses that Sasha’s recorded dialogue provided.

The directing crew was watching my performance on monitors from another room entirely. We did about 14 takes. I was horrendously lit from below with a harsh white light, realistically conveying how we look in the light of our computer screens. And how we look is pretty hideous. I am using the royal “we”.

Although I couldn’t film the scene while watching Sasha, I watched a video of her doing her part of the scene beforehand and, you know what?  She didn’t look hideous. She looked absolutely fucking gorgeous. It was probably good that I couldn’t see her because I would’ve been distracted by her astonishing beauty and overcome by an urge to strangle her.

Another difficult thing was that my whole scene was filmed in one take. So anytime I screwed something up, we had to do the entire scene over.

Towards the end of our dialogue, I have a bit of a lecture I have to give her. About 8-10 sentences, all together. And during one of the last takes, I drew a complete blank in the absolute final stretch of this speech. There, with the camera rolling, the boom guy standing over me, 3 guys on the camera in front of me and who knows how many with the director in the other room, I couldn’t for the life of me remember what came next.

From the other room I heard a loud groan:

Yes, there are worse moments in life, but this was definitely not one of the best.

However, Nacho was wonderfully patient and fun to work with. So was everyone on the crew, which took a lot of the pressure off because I felt among friends.

It’s funny: I never feel anxiety when I’m half-naked and dressed like a drag queen in front of 300 people in a club, but when I’m disguised as a normal civilian and called upon to interpret lines that someone else wrote, in a room with a camera and only 5 people watching, suddenly I’m terrified.

Anyway, it was an intense, sometimes uncomfortable and overall intriguing experience. When you see how much effort goes into making something, you can appreciate it so much more. I feel privileged to be a part of it.